You are here: Home / News / Brain disease and the sense of smell

Brain disease and the sense of smell 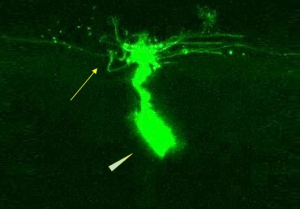 To the average person, the study of the olfactory system suggests research limited to the sense of smell.  It would not be obvious that a researcher might deliberately choose olfaction as a way to discover treatment for Parkinson’s Disease or other brain diseases.

But Claudia Lodovichi, a Group Leader at the Venetian Institute of Molecular Medicine, in Padua, Italy, has done just that, and recently she has collaborated along these lines with a Harvard University professor, Venkatesh Murthy, from the Molecular and Cellular Biology Department.  Their work was published this January in the Journal of Neuroscience.

Dr. Lodovichi believes that the olfactory system is an ideal model for understanding the way the brain works and how it can go awry, largely because it is a highly plastic system.  Neurons regenerate and reform circuits in the olfactory system, which makes it a wonderful way to gain insight into this regeneration process.  She explains, “the specificity of the connection between neurons is critical for normal brain function.  We can do all that we do because thousands – billions – of neurons are connected with exquisite precision.  So, having the model in which I can study that is perfect.“

The fact that the system illustrates how neurons are configured when everything goes right, also makes it ideal for learning how things can go wrong.  Dr. Lodovichi points out that this is not only true for diseases involved in the development of the brain, but also in its aging.  In Parkinson’s Disease patients, for example, lesions characteristic of the disease evidence themselves in the olfactory bulb first, years before they are present in the motor system.  An understanding of what is going on with the synapse transmission that leads to neuron death in the olfactory system and the development of these lesions would advance the discovery of effective treatment.  If researchers can find a biomarker of the very early stage of this disease, earlier diagnosis would be possible, and the sooner the patient can begin therapy the better the result.

Dr. Lodovichi’s lab was established in 2006 through the support of the Armenise-Harvard Foundation’s Career Development Award program.  The Foundation fosters top-level basic science research in Italy and the U.S. and supports collaboration between U.S. and Italian scientists.  As Dr. Lodovichi describes it, the collaboration with Professor Murthy began by chance, “there aren’t many scientists in Italy who study the olfactory system from a systemic point of view, as I do.  I was trying to identify a scientist with whom I could share and discuss my scientific interests, (and) thought of looking at Harvard …due to my link as an awardee of the Armenise-Harvard Foundation.”  Professor Murthy was quickly identified as a scientist with similar scientific interests.  “He has …a systemic approach to the study of the olfactory system and we share the interest in circuit formation and function in this sensory modality.”

When Dr. Lodovichi came to Boston to meet him, they discovered they were working on the same problem – the role of afferent spontaneous activity in circuit formation and function in the bulb – and were using the same line of transgenic mice.  As she continues to explain, “The approach we took was, however, different and amazingly complementary.  He was analyzing the consequence of the reduced spontaneous activity on the functional maps of the olfactory bulb.  I was studying the role of spontaneous afferent activity in sculpting the topographic organization of the olfactory bulb. …He was using a functional approach, mine was more anatomical.  We decided to join efforts in what would become collaboration on a long and articulated project.”

On the Harvard campus, Dr. Murthy had the same feeling of serendipity about this partnership:  “The way this collaboration worked out has been wonderful! Some time ago, a Harvard college student had done a senior thesis on mice with altered spontaneous activity in their olfactory sensory neurons. We found that the glomerular activity patterns were altered, but since we had no anatomical or other mechanistic information, this study was shelved. Imagine my delight when Claudia told me about her beautiful anatomical data. I immediately agreed to contribute our data to her overall story. I think this is a wonderful example of the outcome being much greater than the sum of the individual parts! “

As is often the case, their work was subject to revisions and more experiments were added.  The final version demonstrates that spontaneous afferent activity plays a critical role in the formation and maintenance of neural circuitry in the olfactory bulb.  Complex interactions between spatially and temporally-regulated axon guidance molecules and neuron activity regulate the development of topographic maps, and spontaneous and sensory-evoked activities play important roles in the formation of sensory circuits; the exact contribution provided by each type of activity is somewhat of a mystery.

In these mice, with reduced afferent spontaneous activity, the topography of the olfactory bulb was unrefined. Odor-evoked responses were readily recorded in glomeruli with reduced spontaneous afferent activity, although the functional maps were coarser than in controls and contributed to altered olfactory discrimination behavior. In addition, overexpression of Kir2.1 in adults induced a regression of the already refined connectivity to an immature (i.e. coarser) status. All together their data suggest that spontaneous activity plays a critical role, not only in the development, but also in the maintenance of the topography of the olfactory bulb and in sensory information processing.  The paper appeared in the Journal of Neuroscience, January 7, 2015, 35(1):146-160.[:]

The Foundation loses its Chairman
Scroll to top