A Smell of Sulphur – But it’s Not the Devil! Combined with Iron, Sulphur Protects the Secret of Life

You are here: Home / News / A Smell of Sulphur – But it’s Not the Devil! Combined with Iron, Sulphur Pro...

A Smell of Sulphur – But it’s Not the Devil! Combined with Iron, Sulphur Protects the Secret of Life 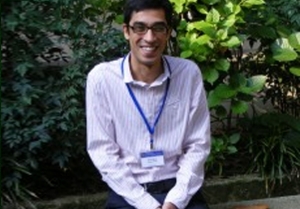 Trento/New York, 7 June 2013 – Sheref S. Mansy has been named a Simons Investigator to take part in the Simons Foundation Collaboration on the Origins of Life. The young American scientist began working in Italy in 2009, at the Centre for Integrative Biology (CIBIO), University of Trento, thanks to an Armenise-Harvard Career Development Award. He hopes to produce a prototype artificial cell in the lab. Thanks to this further funding he will be able to carry out new studies into how primordial life used two apparently simple elements – sulphur and iron – to perform crucial metabolic processes.

“Wiseman knows that iron is much nobler than gold: it contains a large quantity of stable sulphur, of a dark red colour”, these were the words of Fulcanelli, the last famous alchemist of the XX century, who had intuited that these two elements played a fundamental role in the origins of life. The widespread presence of iron and sulphur on Earth, their capacity to easily assemble into complexes, and their presence as protein cofactors in all known life have been known by researchers for a long time. These characteristics have lead to the hypothesis that iron-sulphur compounds were among life’s first catalysts. Previous experimental studies have attempted to explore the importance of iron and sulphur in the origins of life, but these studies mainly focused on minerals and specific geological settings rich in these two elements, such as material coming from hydrothermal vents. Such extreme environmental conditions are not compatible with all of the steps thought to be necessary for the emergence of life. In other words, there has been a disconnect between the prebiotic iron-sulfur field and the rest of the origins of life community. The Mansy laboratory hopes to bridge these two schools of thought by investigating iron-sulphur chemistry under conditions compatible with recent origins discoveries.

“My colleagues and I are creating chemical systems which behave like living cells. Over the last few years we have made much progress. We hope soon, within a year or two, to complete a prototype of an artificial cell. Our progress builds upon our efforts in better decoding how the parts of life work in order to build robust, predictable, biological-like function. In other words, we gain insight into how life works by trying to build from scratch similar systems.”

“My Armenise-Harvard laboratory at the University of Trento works at the boundary between living and non-living, or between biology and chemistry, since my arrival in 2009. Our initial objective was not to explore the origins of life. Nevertheless, the methodologies we have developed over the years are well suited for investigating how non-living molecules could have assembled into a living system on primordial earth. With the support of the Simons Foundation, we look forward to examining likely scenarios for the emergence of functional iron-sulphur complexes on prebiotic Earth.”

This further financing was allocated by the Simons Foundation, a prestigious private foundation located in New York, which supports the progress of research in mathematics and basic sciences and decided to advance our understanding of the processes that led to the emergence of life by supporting creative, innovative research in the context of the origins of life. Alessandro Quattrone, Vice Rector for Research activities and Director of the CIBIO, underlined that “This brave and pioneering approach to financing and supporting a topic which may sound fantasy-like, demonstrates the trust and support of US institutions to the progress of the fundamental sciences. Such an approach is rare in Italy, but it should be encouraged: the results obtained thanks to these innovative research lines constitute the real value of knowledge which we will leave behind to the next generations”.

He has worked at the Ohio State University on the biosynthesis of Fe-S clusters with J.A. Cowan. Later he focussed his work on the construction of proto-cellular model systems with J.W. Szostak at Massachusetts General Hospital. With his Armenise-Harvard Career Development Award he has built his laboratory at the University of Trento, where he constructs artificial cells. Sheref is also a TED Fellow.

Simons Collaboration on the Origins of Life: The origin of life is one of the great, unsolved scientific problems of our age. To advance understanding of the processes that led to the emergence of life, the Simons Foundation has established this collaborative initiative. The program supports creative, innovative research on topics including the astrophysical and planetary context of the origins of life, the development of prebiotic chemistry, the assembly of the first cells, the advent of Darwinian evolution, and the earliest signs of life on the young Earth.

Simons Collaboration on the Origins of Life: https://simonsfoundation.org/funding/funding-opportunities/life-sciences/simons-collaboration-on-the-origins-of-life

CIBIO – The Centre for Integrative Biology at the University of Trento

The last ten years have witnessed an unprecedented revolution in biology. The availability of complete and annotated genome sequences for many species and the increasing affordability of high-throughput approaches for the global monitoring of macromolecules in cells are providing the basis for the mechanistic understanding of living tissues, both in their physiology and in the determinants of their diseased state.
This understanding is starting to allow a rationale reengineering of regulatory networks underlying organismal metabolism, a prediction of the onset and progression of diseases, and a systematic exploration for new and effective therapeutic principles.

The pace at which these goals will be pursued, and their degree of success, depend primarily on the ability of life science researchers to foster a radically new way to carry out the investigation of biological systems. This new way should be largely integrative, strongly relying on a combination of different expertises, and strongly independent from the domain knowledge in which the expertises have been developed.

The Centre for Integrative Biology – CIBIO – at the University of Trento will pursue the task of creating a suitable environment for merging classical cellular and molecular biology approaches with the new powerful tools of systems and synthetic biology, and with the contribution of chemistry, physics, informatics, mathematics, and engineering in an integrative view of basic biological processes and of their derangement in disease.

The Foundation loses its Chairman