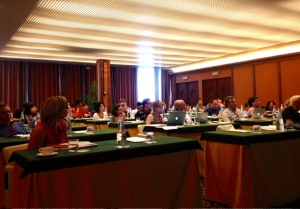 The biennial meeting opened with an introduction and welcome by Dr. Jeffrey Flier, Dean of Harvard Medical School and President of the Foundation.  Dean Flier introduced the keynote speech, given by Harvard Professor Stephen Harrison, entitled “Molecule to Mechanisms”, a deliberate juxtaposition of the overall meeting title, “Mechanisms to Molecules”.  In the closing remarks, Harvard Professor Tomas Kirchhausen described the keynote speaker’s having set the tone for the two-and-a-half-day symposium by outlining various ways to think of molecular activity.

Between the keynote and closing remarks, 20 American and Italian scientists discussed their research, describing interactions happening both inside and between cells.  Professor Kirchhausen summarized the overall meeting this way:

…I think there was a general theme:  that we are dealing with a number of interactions happening in a very complex milieu, a very complex setting, which is both within the cell and cells talking to cells.  In the cellular context, these interactions are happening in platforms.  And these platforms are not just molecules acting as a scaffold; (they) are going somewhere and managing to cluster components that, in time and space, are available to pick up and deliver a signal. This cellular organization can happen at the plasma membrane, it can happen in the soma membrane, it can happen in the nucleus, inside the cell, and it can be between cells, that is, communication between one cell to the other.  And this has a general outcome, also in the context of differentiation and proliferation; when these things go bad, we get transformation and cancer.

With the backdrop of the relevance of this work to cancer research, the talks also illustrated the myriad applicability and the importance to basic medical research of all types.  Examples of the session topics included: cell signaling within the nucleus of the cell; how signaling is regulated, and how the signaling pathways operate; the genomic regulation of cells and how they differentiate; the mechanics behind molecular motors; DNA repair; signaling that takes place in various phases of cell mitosis; the quality control within the signature pathway; the role of ADP-ribosylation in membrane traffic and transcription regulation; the system involved in protein degradation by proteasomes; cell degradation through autophagy; signaling in the Notch cell; control of the epidermal growth receptor; and recent work in synthetic biology, in which a system is created in a balloon, which can then be used as a biosensor.

Along with the scientific sessions, over 30 scientists presented posters, again from labs on both sides of the Atlantic.  The group was honored to be joined by the Foundation’s Chairman, Count Giampiero Auletta Armenise, who gave a touching tribute to his late father, founder Count Giovanni Auletta Armenise, on the last day of the meeting.  And everyone roundly thanked the Symposium Planning committee – Drs. Stephen Blacklow and Joan Brugge from Harvard Medical School, and Dr. Andrea Musacchio, from the Max Planck Institute of Molecular Physiology in Dortmund, Germany, for putting together such an interesting and stimulating program.   A more detailed account of the symposium will appear on the Foundation’s website early this fall.