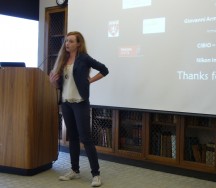 Angela Albi’s talk was titled, “A new approach for image distortion correction in neurosurgical planning”, the real-time brain map that allows a surgeon to follow the actual map of a patient’s brain.  Angela was in Prof. Alexandra Golby’s lab, and worked under the supervision of Lauren O’Donnell and Chantal Tax.

Laura Convertino presented on “Handling the pain, a CRISPR/Cas9 Approach”, a project she worked on in Prof. Clifford Woolf’s lab in Children’s Hospital’s Neurology Dept.  Laura was helped in her work by Yung-Chih Cheng and Cédric Laedermann.