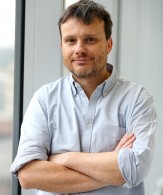 Neuroscientist Alberto Bacci studied at the University of Milan where he obtained a B.Sc and then in 2000 a doctorate in pharmacology and experimental therapeutics. He completed a period of postdoctoral research in the Department of Neurology at Stanford University, in the United States. Upon his return to Italy in 2005, he went to lead a research team at EBRI (European Institute for Brain Research) and then in 2011 he moved to ICM (Brain & Spine Institute), Paris, France.

Inhibition maintains a balance between inhibition and excitation in neural networks. It prevents excitability from spreading in an uncontrolled way from one neuron to another across the synapse, and keeps it confined to where it is needed and where it has a function in that particular moment. In short, it acts as a switch.

Malfunction of inhibitory nerve cells underlies epilepsy, and several psychiatric diseases, such as schizophrenia and autism.

Alberto Bacci’s team is studying how a particular class of neurons, interneurons, carries out its inhibitory work. The lab is dealing with neurons whose axons reach a single brain area and mostly use one neurotransmitter, GABA, to communicate with one another.

They are located in the cortex, the place where information coming from the sensory systems is integrated and used for higher cognitive functions. These neurons are rather like the brain’s conductors because they give large populations of neurons the “tempo” of excitation, modulating their oscillatory activity.

News from the lab

To do so, he employs a wide range of techniques including single- and multiple-cell electrophysiology, imaging, optogenetics, neuroanatomy and cell biology.