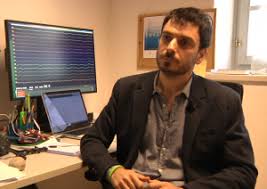 Giuliano Iurilli  got a B.S. in Biological Sciences and a M.S. in Neurobiology from the University of Pisa, Italy. He started his scientific journey in the laboratory of Neurobiology of the Scuola Normale of Pisa, under the mentorship of Tommaso Pizzorusso and Nicoletta Berardi. In 2011, he got a PhD in Neuroscience and Robotics from the Istituto Italiano di Tecnologia in Genoa, Italy, where he worked under Paolo Medini’s supervision. After being awarded a Long-Term Fellowship from the Human Frontiers Science Program, in 2012 he joined for a postdoc the lab of Sandeep Robert Datta in the Department of Neurobiology at Harvard Medical School.

At the beginning of 2019 he established his brand new Armenise Harvard Systems Neurobiology Lab at the Center for Neuroscience and Cognitive Sciences of the Italian Institute of Technology in Rovereto (IIT-CNCS).

Olfaction is the primordial sense used by all animals to investigate the world. That’s why Giuliano Iurilli focused on olfactory-driven behavior: his research team at Harvard Medical School used the mouse model system to study how neural circuits transform sensory signals to generate adaptive behavior, with a special emphasis on olfactory cues. As a PhD student in Italy, he made significant contributions to understanding how the brain combines stimuli from different sensory modalities (vision, touch, audition) to obtain a unified perception of the world.

After six years at Harvard, thanks to the Armenise Harvard Career Development Award, he returned to Italy to establish his own lab on systems neurobiology. At IIT-CNCS he studie the fascinating biological mechanisms that support our complex cognitive processes.

His research project at IIT-CNCS aims at understanding the biological mechanisms that support cognitive processes. Giuliano Iurilli’s team is developing new tools for analyzing innate and trained behaviors in order to discover and model behavioral rules. Their final goal is to determine how neurobiological principles lawfully constrain behavioral rules, which is key to developing actionable therapeutic strategies.