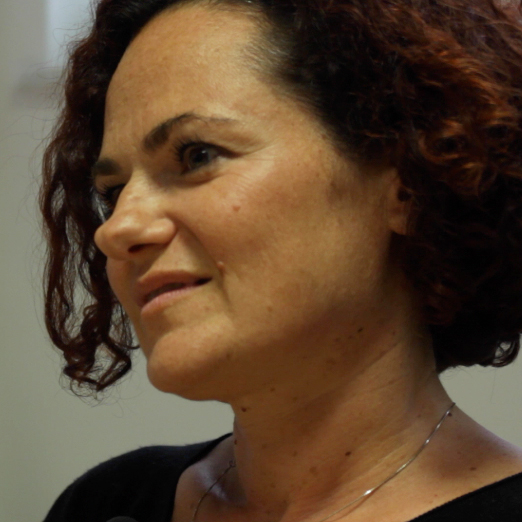 “Deciphering the language of Histone Modification in the establishment of cell identity by Proteomics”, 2007

Biochemist Tiziana Bonaldi works on nuclear proteomics at the European Institute of Oncology in the Department of Experimental Oncology. After a degree in molecular biology and a doctorate in biochemistry, she worked for six years in Germany, at the Adolf Butenandt Institute in Munich and at the Max Planck Institute of Biochemistry in Martinsried. She then returned to Italy in 2008 thanks to the Armenise Harvard Career Development Award.

Her work involves chromatin, a three-dimensional macro complex made of proteins and DNA that regulates gene expression. In particular, Bonaldi and her team study how the decoding of DNA contributes to cellular development and how this mechanism changes in the course of tumor progression.

They have a different methodology – based on DNA decoding – from the one adopted by most cancer centers in Italy, which has a genomic approach.

Bonaldi and her team instead focus on proteins. This approach is called proteomics: proteomics consists precisely in systematically identifying proteins, and it is considered post-genomic because it was developed after the completion of the genome project. However, genomics and proteomics are not conflicting but complementary. In fact, the transition from genes to proteins is much more complex than previously thought: the study of proteomics adds a perspective that had previously been ignored.

Bonaldi and her team are also trying to find the answers to basic biology questions with a highly technological approach. In fact, the tool used to carry out this research is mass spectrometry, an analytical technique borrowed from chemistry.

In the last 2 years research in the Bonaldi lab has evolved in two new directions.

On the one hand, thanks to the support from a 5-years AIRC-Investigator Grant, she has been focusing on the development and application of an innovative proteomic platform for the systematic and functional analysis of protein-K/R-methylation beyond histone, in order to: discover the cellular processes and signalling pathways in which this modification is implicated; understand how its disregulation impact on cancer onset and progression. This study allows to better understand the mechanism of action of the methyl-transferases mediating the deposition of this modification on proteins, and –consequently- of the numerous inhibitors under development, many of which have strong potential as anti-cancer drugs and are in clinical trials.Recent results have pointed towards the role of protein—methylation in the context of
transcriptional and post-transcriptional/translational modulation of gene expression in response to various stresses, which represent the major focus of current research.

On the other hand, the group has strengthened the collaboration with the clinician working at the IEO cancer hospital, developing clinical proteomics project for the in depth analysis of the proteome and epi-proteome of cancer patients (in particular from lung, breast and ovarian cancer), for the identification of new diagnostic and prognostic biomarkers and the discovery of novel therapeutic targets. Within this line of research, we have been pioneering the use of MSproteomics to dissect the epigenetic landscapes of cancer patients, developing unique innovative methods and collecting seminal observations on epigenetic alteration in cancer. Currently we are focusing on the trying to move from the description of the molecular profiles of patients to the dissection of the epigenetic mechanism underpinning specific tumor features such as proliferation/aggressiveness, genomic instability and resistance, by integrating the MS proteomics data with transcriptomics, ChIP-seq and metabolomics ones.