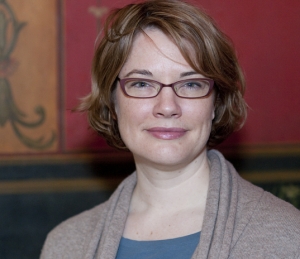 Angela obtained her B.S. in Molecular Biochemistry and Biophysics at  Yale, and her PhD in Biochemistry at the University of California San Francisco, where she worked with Jonathan Weissman on the mechanism of prion propagation. In 2008, Angela began her lab in the Systems Biology Department at Harvard Medical School with the help of a Junior Faculty Grant from the Armenise Harvard Foundation.

Regulation of gene expression is critical for every biological process, from development and differentiation to aging and disease. In contrast to sequences coding for proteins, we cannot yet “read” gene regulation directly from any genome because we do not have a clear mechanistic picture of transcription. The goal of Angela’s lab is to understand, in biophysical terms, how genomic sequences integrate information to produce gene expression patterns. Deciphering these fundamental molecular mechanisms will have widespread consequences for how we identify regulatory DNA and how we interpret regulatory DNA sequence, two challenges that are central to achieving precision medicine.

The lab is currently investigating two fundamental aspects of regulatory DNA function. First, researchers are probing the extent to which enhancers, which direct expression patterns in space and time, behave as independent modules. Their data indicate that enhancer function is sensitive to context, which has important consequences for how to interpret regulatory sequence variants such as duplications, deletions, and translocations. Second, Angela’s group is developing new experimental and theoretical approaches for probing the dynamic role of transcription factors in orchestrating the transcriptional cycle, including non-equilibrium processes such as nucleosome remodeling and post-translational modification.