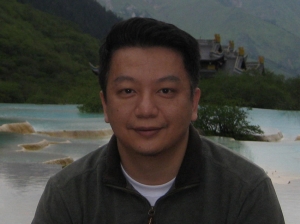 After a B.S. in Physics at University of Michigan, James Chou received Ph.D. in Biophysics at Harvard with Gerhard Wagner, where he investigated proteins involved in programmed cell death. As a post-doctoral fellow with Ad Bax at NIH, he developed NMR tools for delineating protein conformational changes and investigated properties of lipid/detergent bicelles for membrane protein studies.

In 2003, Dr. Chou returned to Harvard Medical School as an assistant professor. In 2006, thanks to Giovanni Armenise Harvard Junior Faculty Award, James was able to advance the NMR technology for structural and functional characterization of membrane proteins and successfully applied it to address important mechanistic questions associated with proton transporters and immunoreceptors. He is now a full professor of Biological Chemistry and Molecular Pharmacology at Harvard Medical School.

Membrane channels, transporters and receptors constitute essential means for cells to maintain homeostasis and communicate with the surroundings. James Chou’s laboratory has been using NMR spectroscopy to study these proteins, while pushing the technological envelope to enable characterization of the structure and dynamics of membrane protein systems that are too dynamic to crystalize and too small for cryo-EM.

One aspect of his research is the structure and mechanism of viral ion channels. His earlier work on influenza proton channels have established a general NMR approach for characterizing the structures of viral channels, and for understanding the structural basis of drug inhibition and drug resistance. The long term goal is to develop novel antiviral therapeutics that target these viral membrane proteins.

Another area is developing NMR tools and apply them to investigate the dynamic transporters and ion channels. In particular, his research team is using spectroscopic techniques to investigate the “dark” states of proteins that are often critical to understanding their function as well as allosteric modulation of protein function by ligands and substrates.

More recently, James Chou has started to investigate the function of the transmembrane and membrane proximal regions or domains of receptors in regulating the function of receptors. The membrane-associated regions of cell surface receptors have long been the blind spot in structural biology. His team has developed powerful NMR/Biochemistry approach that enabled structure determination of the transmembrane domains of several immunoreceptors. They are developing new technologies to enable the study of conformational coupling between the receptor transmembrane and cytoplasmic domains, which are essential for transmembrane signaling.