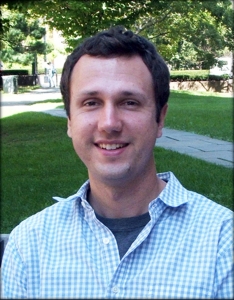 Christopher Harvey received a B.S. in Biomedical Engineering from Vanderbilt University in 2003. Harvey completed his Ph.D. at Cold Spring Harbor Laboratory in 2008 working with Dr. Karel Svoboda to study the spatial and temporal profile of signaling at neuronal synapses. From 2008 to 2011, Harvey worked as a postdoctoral fellow with Dr. David Tank at Princeton University studying coding and dynamics in the hippocampus and cortex. Since 2012 Harvey has been an Assistant Professor in the Department of Neurobiology at Harvard Medical School.

The goal of Christopher Harvey’s lab is to understand fundamental principles for the function and organization of neuronal circuits in the mammalian cortex. His lab investigates how circuits perform computations involved in working memory and decision-making, especially in the context of spatial navigation.

The Harvey lab’s approach is based on connecting properties of neuronal circuit function with behavior in the mouse. The lab utilizes a variety of experimental methods to study activity dynamics in circuits and the relationship between circuit dynamics and architecture. Recently, they have initiated efforts to combine their experimental program with a program for computational and theoretical modeling. Together their approach emphasizes the dynamics and mechanisms by which circuits perform computations (how does a circuit compute?) and, to a lesser extent, also aims to identify the computations performed in specific circuits (what does a circuit compute?).

The Harvey lab’s work is made possible by new technology they have developed to study the function of neuronal circuits in mice. They have developed a virtual reality system in which mice navigate through virtual environments by running on top of a spherical treadmill. The lab has successfully trained mice to perform complex navigation-based decision-making and working memory tasks in virtual reality environments. In addition, the lab measures neuronal activity during behavioral tasks in virtual reality using sub-cellular resolution microscopy methods and electrophysiological recordings. Recently, the lab has developed approaches to simultaneously measure and manipulate the activity of individual neurons during behavior to test hypotheses about neuronal circuit function and architecture.

Current work in the Harvey lab focuses in large part on the posterior parietal cortex (PPC), which is thought to be a key interface between sensory and motor information, including during working memory, decision-making, and navigation. Current projects emphasize a variety of questions. First, the lab aims to identify the fundamental activity patterns in the PPC during complex behaviors and the mechanisms by which these activity patterns are generated. The lab investigates PPC activity dynamics using measurements of activity in large neuronal populations during behavior, controlled manipulations of PPC activity to reveal key features of dynamics in PPC populations, and studies of how activity patterns develop during learning of new behavioral tasks. Second, the Harvey lab aims to understand how dynamics in the PPC arise from the underlying microcircuit architecture. They are developing approaches to map features of microcircuit architecture in neuronal populations that have been functionally characterized to aid understanding of circuit-level structure-function relationships. Third, the Harvey lab studies how the PPC interacts with other brain areas in a larger network for complex computations. They utilize experiments to manipulate and monitor specific input and output pathways of the PPC.