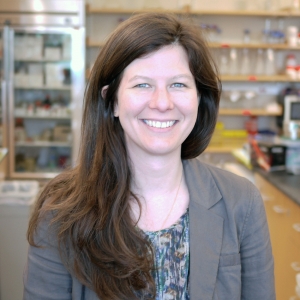 Stirling Churchman, Ph.D. is an Assistant Professor in the Department of Genetics at Harvard Medical School. Using high-resolution quantitative approaches, her laboratory investigates how gene expression is regulated from both the nuclear and mitochondrial genomes. Dr. Churchman majored in physics at Cornell University and obtained her doctorate in physics from Stanford University in 2008. She was a postdoctoral fellow with Jonathan Weissman at University of California, San Francisco. There she developed an approach, native elongation transcript sequencing, NET-seq, that directly visualizes global transcriptional activity through mapping RNA polymerase density genome-wide with single-nucleotide resolution. Dr. Churchman joined the Genetics Department at Harvard Medical School as an Assistant Professor in 2011. She is also an Associate Member of the Broad Institute of Harvard and MIT.

Diverse control mechanisms converge to ensure that gene transcripts are expressed and processed accurately. Dissection of these interactions has proven challenging, because most experimental approaches record downstream products fed by multiple pathways – for example, mature mRNA as the combined product of transcription and splicing.

The Churchman Lab enables direct mechanistic insights into fundamental biological processes by developing and applying quantitative approaches that create high-resolution views of genome function. The group has developed methods for genome-scale, high-precision measurement of Pol II transcription in yeast and mammalian cells (Churchman and Weissman, Nature 2011; Mayer et al., Cell 2015). These approaches have enabled fundamental insights into many aspects of eukaryotic transcriptional control, such as transcriptional pausing, and they bridge the divide between the wealth of in vitro biophysical studies and in vivo genomics.

Aside from eukaryotic transcription regulation, the lab is interested in the mechanisms that couple gene expression processes, with two current areas of focus:

1) the coupling of transcription elongation with co-transcriptional processes, particularly splicing;

2) the coordination of mitochondrial and nuclear gene expression in the assembly of oxidative phosphorylation complexes. By determining the molecular mechanisms that control transcription and couple gene expression processes, scientists at the lab aim to open new vistas on potential therapeutic strategies for correcting the defects in splicing dysfunction and energy production that are increasingly recognized as drivers of disease states.

RNA transcription is regulated during elongation to control mRNA abundance and RNA processing. In order to elucidate these regulatory mechanisms in human cells, Churchman’s group establishes a powerful new approach that quantitatively monitors all human transcriptional activity with unprecedented resolution, unveiling novel regulatory mechanisms and opening myriad new avenues of investigation. These data enable precise identification and quantification of RNA polymerase pausing across the human genome, as well as a detailed picture of how transcript elongation is modulated in the context of major functional genomic landmarks.