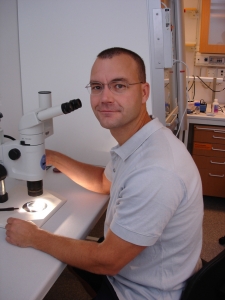 In 1999, he moved to Harvard Medical School and established his first independent lab, in the Department of Neurobiology. In 2004, he moved back to his native country Sweden, and is currently a Professor of Developmental Biology at Linkoping University.

During the last two decades the field of developmental biology has made substantial progress with respect to identifying the molecular genetic mechanisms generating neuronal diversity.

In contrast, less is known regarding the control of proliferation during nervous system development. This includes proliferation control not only of neural progenitors (neural stem cells) but also of different classes of daughter cells.

Moreover, how proliferation control is integrated with cell fate specification, such that the precise cell number of each neuronal sub-type is generated, is essentially unknown.

Current research in the lab focuses on proliferation control in the developing nervous system, and how proliferation is integrated with cell fate decisions to ensure that the proper number of each cell type is generated.