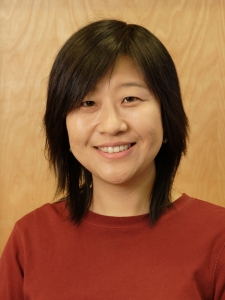 Chenghua Gu is currently an associate professor in the Department of Neurobiology at Harvard Medical School. She did her PhD with Dr. Moses Chao at Cornell Medical School in New York city and her postdoctoral training with Dr. David Ginty at Johns Hopkins Medical School, Baltimore. Her laboratory studies the interface of two complex, structurally and functionally related systems in the brain, the nervous and vascular systems. Her laboratory employ genetically engineered mouse models with specific mutations and tracers combined with imaging and physiological approaches to reveal the neural and vascular networks in vivo. They also developed a variety of in vitro assays, screening strategies, and computational models to elucidate the mechanisms of action.

Her laboratory recently demonstrated that inhibition of transcytosis is a major mechanism for blood brain barrier (BBB) function, a surprising result in view of the nearly exclusive previous emphasis on the importance of tight junctions. By developing novel technology to monitor the BBB function, her lab discovered the first molecule that controls BBB permeability by inhibiting transcytosis, and a panel of other potential key molecular regulators. From the therapeutic standpoint, her findings suggest that molecules that inhibits transcytosis could be targets for opening the blood brain barrier. The lab is currently characterizing additional candidate genes and developing technologies to further understanding of the mechanisms controlling BBB formation and function.

In earlier studies, Dr. Gu’s lab contributed to the recognition that the same guidance cues and their receptors are used for wiring both the nervous and vascular systems, and discovered basic principles governing the establishment of neurovascular congruency.

The current challenge of the BBB field is to identify essential molecular components and mechanisms that regulate its integrity. Two bottlenecks thwarting progress are the lack of an in vitro system to efficiently identify the key components from a large number of candidates, and the lack of an in vivo live imaging system to reveal real-time BBB physiology and study the dynamic mechanism of the key BBB genes. We have recently made progress towards solving the first bottleneck by developing an in vitro system that will not only allowing identifying a variety types of regulators (transcytosis, tight junctions, and master transcription), it will also allow reconstitute BBB in vitro with the identified minimal components.

Moreover, the imaging tools we are now building should produce a high pay off, not only in providing unparalleled resolution to study real time BBB physiology for the first time, but also in allowing investigation of the efficacy, speed, and reversibility of agents that perturb the BBB. This study, still under way, is financed by funds received from the NIH Director’s Pioneer Award.