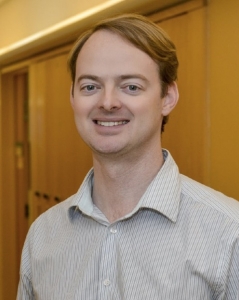 Sean Megason received a BS in Molecular Biology at the University of Texas at Austin in 1997. He performed his PhD in the laboratory of Andrew McMahon at Harvard on the control of organ size in the neural tube. He then went to Caltech for postdoctoral research in the laboratory of Scott Fraser on microscopy where he developed “in toto imaging”.

Dr. Megason started his laboratory at Harvard Medical School in the Department of Systems Biology in 2008.

The Megason Lab pursues these questions in the inner ear and spinal cord of zebrafish using a variety of techniques including microscopy, mathematical modeling, and molecular and mechanical perturbation.

Most recently the Megason Lab has developed new theories concerning how the size of organs is controlled despite numerous sources of variation. In the inner ear, negative feedback between fluid pressure in the lumen and the flux of fluid into the ear allows size variation to be controlled.