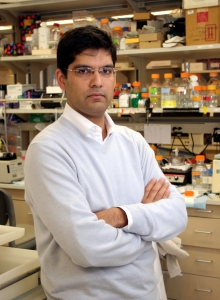 Sandeep Robert Datta obtained a Bachelor of Science degree in Molecular Biochemistry and Biophysics from Yale University in 1993, and obtained an M.D./Ph.D degree from Harvard University in 2004. After working as a postdoctoral fellow at Columbia University with the Nobel laureate Richard Axel, he joined the Harvard Medical School Department of Neurobiology in 2009.

The Datta Lab focuses on understanding how sensory cues — particularly odors — are detected by the nervous system, and how the brain transforms information about the presence of salient sensory cues into patterns of motivated action.

This work involves studying genes involved in detecting odors, revealing the patterns of neural activity deep in the brain that encode sensory maps of the outside world, and probing the fundamental statistical structure of behavior itself. Recent work in his lab has focused on three main projects:

The Datta Lab has recently developed a new method for characterizing the underlying structure of spontaneous or stimulus-evoked mouse behavior (Wiltschko et al, Neuron 88:1-15, 2015). Its approach was inspired by the groundbreaking work done by ethologists like Niko Tinbergen and Konrad Lorenz, who posited that complex patterns of behavior are composed of atomic behavioral modules that are placed into specific sequences by the brain to generate meaningful action.

To identify potential behavioral modules in rodents, the researchers image moving mice with high spatial and temporal fidelity using a 3D infrared imaging technique that requires only a single camera. By analyzing data from this 3D imaging stream using recently developed techniques in computational inference, they have found that mouse behavior can be effectively described as a series of reused and stereotyped modules with defined transition probabilities.

By analogy to birdsong, scientists at the Datta lab refer to each of these units of behavior as a behavioral “syllable”, which is placed into sequences by the brain using the predictable rules of a behavioral “grammar.” Each behavioral syllable is a 3D motif of behavior (e.g., a turn to the right, a pause, a headbob to the left) that the mouse reuses repeatedly during complex behavior. By using this combined 3D imaging and computational modeling technique, researchers can automatically identify both predicted and surprising alterations in behavior induced by a variety of experimental manipulations, ranging from changes in the sensory environment to activity changes within a specific neural circuit.

This work demonstrates that mouse body language is built from identifiable components and is organized in a predictable fashion; deciphering this language establishes an objective framework for characterizing the influence of environmental cues, genes and neural activity on behavior.