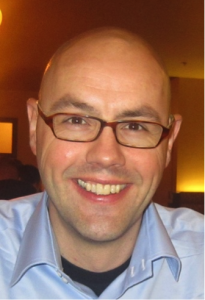 After completing his undergraduate and graduate studies in physics at Leiden University in the Netherlands, Antoine van Oijen commenced his postdoctoral training in 2001 with Sunney Xie at Harvard University. He started his own lab at Harvard Medical School’s department of Biological Chemistry and Molecular Pharmacology in 2004, in part supported by a Junior Faculty Grant from the Armenise-Harvard Foundation. In 2010, he moved his research efforts to the University of Groningen in the Netherlands, followed by a relocation to the University of Wollongong in Australia in 2015.

His research revolves around the development and use of single-molecule biophysical tools to study complex biochemical systems. In particular, his group is using single-molecule approaches to understand how processes work such as DNA replication, viral fusion, and membrane transport. Following the motto ‘Seeing is believing’, his group tries to visualize, in real time, how molecular machineries do their work.

A good example is the work of van Oijen’s group on DNA replication, where they use mechanical tools to stretch a strand of DNA and monitor length changes as a readout for the progression of the replication machinery. By simultaneously observing the fluorescence of individual replication proteins on the DNA, dynamic changes in the composition of the multi-protein replication complex can be visualized. Using this single-molecule philosophy has contributed tremendously to the answering of a number of complicated questions related to the coordination of the DNA unwinding, priming and synthesis activities that take place at the replication fork.

Trained as a physicist but having worked in a biology environment for a large part of his career, van Oijen loves combining the development of new tools with solving mechanistic puzzles at the molecular scale. At the University of Wollongong, he is involved with the establishment of an exciting new institute that brings together colleagues from the different disciplines to study life at the molecular level.