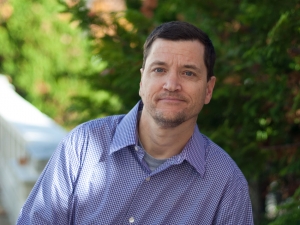 Steven Gygi received his Ph.D. from the University of Utah in Pharmacology and Toxicology. His focus was on small molecule detection by mass spectrometry. He next moved to Seattle for a postdoctoral fellowship with Ruedi Aebersold at the University of Washington. In 2000, Steve started his own lab at Harvard Medical School. His current rank is Professor in the Department of Cell Biology.

Research in the Gygi lab centers on the proteome-wide measurement and characterization of proteins and posttranslational modifications by high performance mass spectrometry. One of the most dramatic developments in biological research is the shift from the analysis of single genes and proteins to the comprehensive analysis of biological systems and pathways. This shift is a consequence of the development of automated, high-throughput genomic technologies and their application to sequence complete genomes and to measure gene expression on a genome-wide scale.

Currently, comparably powerful technologies are becoming available for the analysis of biological systems on the protein level. Proteins are the functional units of the living world—the molecules which carry out most catalytic, structural, and regulatory functions inside cells. A complete model of a biological process cannot be established without knowledge of the involved players and mechanistic characterization of their functional roles. The lab is  committed to the development and application of technologies for the rapid, sensitive, quantitative and multiplexed analysis of protein expression and protein phosphorylation profiles from diverse cellular settings.

The Gygi lab in collaboration with Wade Harper’s lab recently published the BioPlex network. BioPlex is a protein interaction network that is made up of more than 2,500 different immunoprecipitation experiments with different human proteins as baits. The network spans more than 9,000 proteins and is the largest of its kind.