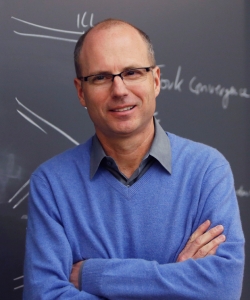 Johannes Walter was born in Munich, Germany in 1967 and moved to the United States when he was one year old. He grew up in San Diego, California and went to college at UC Berkeley. In 1989, he began graduate school at Yale University, where he studied transcriptional regulation in fruit flies, graduating with a Ph.D in Molecular Biophysics and Biochemistry.

In 1995, he joined the laboratory of the late John Newport at UC San Diego.  There, he used frog egg extracts to develop the first soluble cell-free system that supports vertebrate chromosomal DNA replication. In 1999, he joined the faculty at Harvard Medical School. In 2013, Dr. Walter joined the Howard Hughes Medical Institute.

Dr. Walter studies how vertebrate cells faithfully duplicate their  genomes in S phase using egg extracts from the African clawed toad, Xenopus laevis.  These extracts are remarkable in that they recapitulate key processes underlying genome propagation, including DNA replication, the ATR and ATM checkpoints, chromosome cohesion, ubiquitin-mediated proteolysis, many DNA repair pathways, and the segregation of chromosomes in mitosis.

The lab seeks to understand the molecular machines that carry out DNA replication and how these machines are regulated by ubiquitin-mediated proteolysis to limit genome duplication to exactly one round per cell cycle.  His lab studies DNA inter-strand cross-link repair and how this process goes awry in the human genetic disorder, Fanconi anemia.

Most recently, the Walter lab has studied the repair of DNA protein cross-links (DPC). They found that like ICL repair, DPC repair is coupled to DNA replication and involves a protease that destroys the DPC on DNA, allowing replicative bypass. They also developed a new system to induce site-specific and synchronous replication termination. This approach revealed that converging DNA replication forks do not slow down and that the replicative DNA helicases pass each other and are unloaded from double-stranded DNA.